← Intimacy and photography, how much life can interact with a photographer’s work (and vice versa) : Seiichi Furuya.
Self publishing vs DIY publishing : Dog food and oysters by Sean Davey. →

Traveling at home – The use of Google Street View in contemporary photography.

To introduce this post, let me be clear : the purpose is not to talk about the question of Google and the privacy. I am only interested by the use of Street View, and from my point of view, it has some interesting values. For instance, when I had to work for a week in Hammerfest – Norway as commissioned photographer, I entered the location in Google Maps and started a virtual visit of the place. I can have some first impressions that will start to make me think of the place and what I can do there. But, so far, it was only, for me, a tool before really visiting and working in the area. 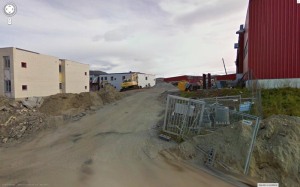 Using Street View is a bit like living in front of a train station, you know that, pretty instantly, you can go all over the world. It is the most achieved form of teleportation as it was dreamt when we were kids, reading A.E. Van Vogt or Isaac Asimov books. If you find a place boring, you can leave and go instantly elsewhere, this is the waranty of a successful travel !

For the last couple of years, we have seen more and more photographers, or shall I say artists, using Google street view as a creative tool. They travel with their computer, seating in front of their screens and work as street photographers, catching the decisive moment praised by Henri Cartier-Bresson.

I have four examples in mind and, of course, the first one is the famous « A new American picture » by Doug Rickard, first printed as an ultra limited artist book, it became rapidly one of the most sought after book of 2010. It has now been reprinted as a trade edition by Aperture. What is interesting in this book is the reference to the history of American photography, from Walker Evans to Robert Frank or Stephen Shore. Doug Rickard tries to catch the moment, or, for better say, to select it, as the recording of the moment has already been done before. It is very convenient as the subject stay still while the photographer/catcher can adjust his framing to the exact composition he wants. This is one of the great quality of Doug Rickard’s work. More pictures here : http://www.dougrickard.com/photographs/a-new-american-picture/ 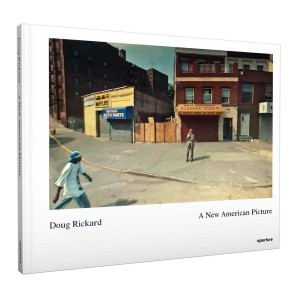 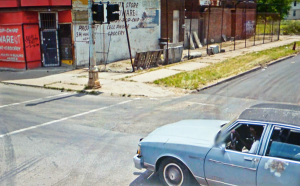 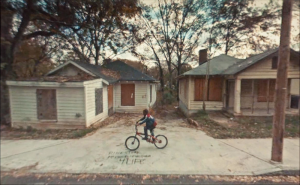 Very close in its spirit is « No man’s land » by Mishka Henner (two volumes so far 2011 – 2012). It is an open edition printed by Blurb. The topic of those photographs is the prostitution in the outskirts of cities in southern Europe. On every pictures, we see women waiting for a potential client, and, as with Doug Rickard’s work, the hidden faces effect, due to Google restrictions is of a great interest considering a kind of social subject ! It reminds us popular newspapers when they add a black band on faces to avoid the recognition of people. Mishka’s site : http://www.mishkahenner.com/No-Man-s-Land

The third one is « The Nine Eyes of Google Street View » by Jon Rafman, published in 2011 by Jean Boîte Editions (same publisher as Kim Jong Il looking at things). He has been wandering in Google Street View land for a couple of years, looking for some poetic pictures of unprobable encounters. You can follow his collection of images on his tumblr : http://9-eyes.com/ and his book here : http://www.jean-boite.fr/box/the_nine_eyes_of_google_street_view 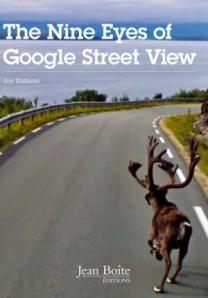 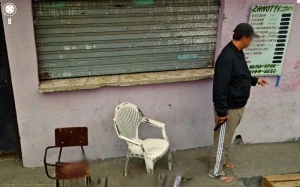 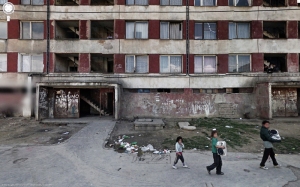 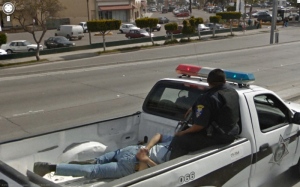 The fourth one is called « ASOUE » by Michael Wolf (for A Series Of Unfortunate Events). Here again, we find a selection of unprobable scenes from the Google world also with the use of enlargement which remind us to the pointillism period. Whatever funny are the situations, the photographs are really plastically beautiful with this dot effect. Michael Wolf site : http://photomichaelwolf.com/#asoue/1

Those four examples share one very strong idea which refers to the expression « it has been » as written by Roland Barthes in Camera Lucida : reflexions on photography. In fact, « it has been » twice. First when « Google was there » (as you can find some graffitis on walls that attest that you’ve already been there) and a second time with the one, in front of his computer, selecting the « view ».

This can also be the weakness of those works. They are strongly connected to a conceptual idea which is about the recursive representation of our society working like a loop, and it sends us back to the main, everlasting question of the creativity. Who is the author ? Is it Google, or the one that comes after, making the choice and the editing. On this basis you can start to build new protocols and create new pieces of works ; we can imagine a blind man, using randomly the trackpad in Street View and selecting screens to be captured…

So here is another beautiful project that I really like a lot. I mean, with all due respect to those works above which I appreciate, this is a piece of work that fits perfectly to the Google Street View world and which is one of my favorite now. It takes the form of a blog called “Dreamlands virtual tour” and is managed by Olivier Hodasava. On Friday 14th May 2010, Olivier started to virtually travel with Street View and went first to Manchester. This was the beginning of a long story and his blog became a travelog of a world exploration, and not only a collection of « beautiful postcards ». By travelog, I mean it comes with many stories (you must read the one from Fargo to Winnipeg with Sheryl… well, you must read every posts, but I just forgot to tell you that, unfortunately, they are in French) and a great interaction with actuality and/or other people. For instance if you follow his blog, you can suggest him a move to a place you know while he is in the area at the moment. Just after the revelation of Cleveland sequestration, he moved himself, like a peeping Tom, to the house of horror ! This is the real quality of the work, because it uses Street View with its full potentiel of stimulation of the imaginary. We can recognize a place where we have already been and have had our own story there (I have been there before, I knew these people…), or even create our own new story with some crossover pictures. And, if Doug rickard was refering to American history of photography, you can find many references in Olivier Hodasava’s work especially, when he is in America, to Paris Texas or Alice in the Cities by Wim Wenders.The blog restitution is perfect for the virtual world, he drives us to a never ending (?) journey and, so far, he is in his 1111th day of travel. This becomes everybody’s dream: just traveling without settling anywhere and just looking for a new place every forthcoming day! I would love to do that in the real life!

So for everybody who can read French, just stay by the road hitch-hiking, you may see Olivier coming soon, and for sure… Don’t miss him!

And by the way… for street photographers who want to stay in their sofa, there is a Russian version of Street View with the great advantage of not blurring the faces, but fully in Russian. It is called Yandex!

5 Comments on “Traveling at home – The use of Google Street View in contemporary photography.”