Looking for my father by Natalya Reznik

The characteristic of photography, of all times, was to record the real, in order to preserve a trace or a memory. It has long been considered that a photograph can not lie, that it was essentially objective. Nevertheless, the most known examples of manipulation of images will appear during the XXth century, in the Soviet Union, especially in the political field when Stalin was erasing all of his opponents from photos and thus from history, one after another. So the picture is authentic ! If we are on the photo, then the moment has existed, at least for us. If we are not on it, it is because the moment did not exist!

Based on these considerations, Natalya Reznik became interested in her family history. In the XXth century, and particularly, in the Soviet Union, the family photo album was a central element of the family memory. A book that used to tell the family saga, the history of the parents, the grandparents … It was the opportunity to find similarities, to understand links. But Natalya never knew her father. An absent military father, who, when she was three-year-old, disapeared from her mother’s life and divorced. He left, above all, to her mother, the feeling of a betrayal that she would never forgive. She will refuse to talk to Natalya about her father and will even remove every pictures from him. Like many teenagers and young women, her mother, to overcome her disappointment, will fill the blanks, with dreams of cinematic loves with European movie stars of the moment : Jean Marais, Alain Delon, Jean-Paul Belmondo or Marcello Mastroianni! 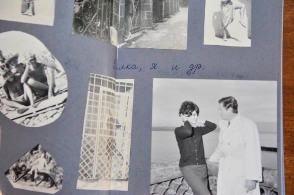 But if the mourning overcomes the death of a loved one, it is quite different for the absent. How to be oneself without knowing where you come from, without knowing those little things that characterize us all. With this book, Natalya began the search of her father. Starting from family photographs, she will rework the photographs by incorporating the figure of this idealized father through the cinema of the 60s and 70s. Daily scenes which sometimes include Delon, or Belmondo. A strange impression emerges from the images. The cinematographic dimension is very strong, as the images of the actors that she uses have become, through time, icons (thinking about it, icons are another aspect that brings us back to Russia!). An impression of déjà vu which remains disturbed by the context of the daily scenes of the Soviet Union. This imaginary world reconciles East and West and represents all the aspirations of people that come out of years of struggles and wars. 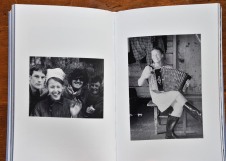 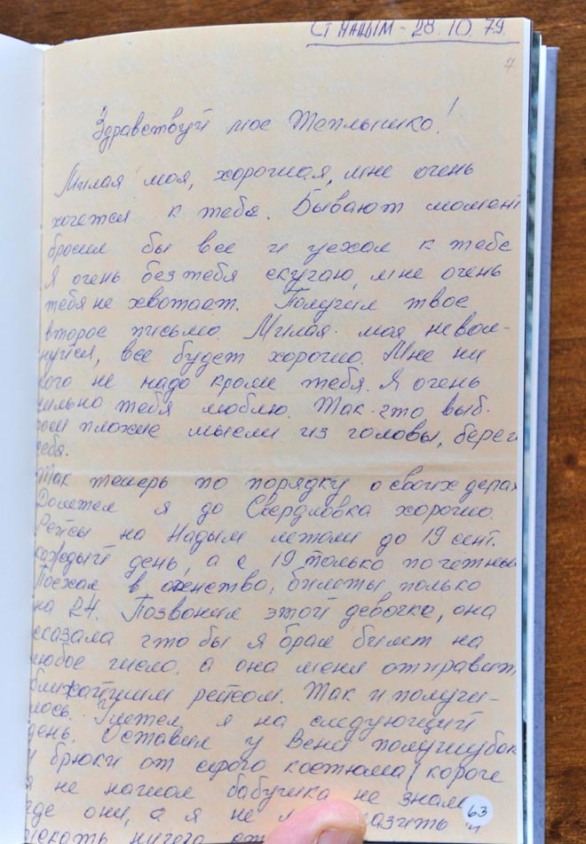 With this work, it is a cathartic process that initiates Natalya. From photographs extracted from her mother’s album, she patiently (re)builds her past, between dream and reality, but above all, from her own memories, reversing the process that it is no longer here photographs that tell the story, but the story that determines the photgraphs. Photography is no longer a source of memory but becomes the representation of memory! This representation takes all its strength when Natalya uses the only bexisting photographs of her father, a series from a photobooth where he posed with her mother. In these photographs, we do not recognize him, he wears sunglasses that hide his eyes, large aviator sunglasses, in vogue during those years, which were supposed to confer a certain charm. She then reworked some of these images and intertwined them with the originals, making it more tangible and recognizable those surrogate fathers who look at us in the eyes, rather than that unknown man hidden behind his smoked glasses. The book ends with two sea views, the first, sunny and calm with birds, seems to send us back in the south around Sochi area, where it all started, during a resort affair. The second shows us a sea caught in the ice, and evokes the northernmost seas, where his father worked and how the story found an end; metaphor of an antagonism of two incompatible worlds despite of appearances. 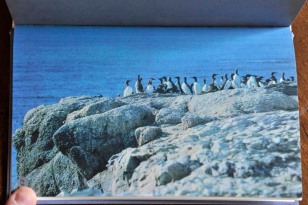 The book is very elegant and the artistic experience really interesting, but beyond these considerations, this book also addresses a very serious subject that is the need for identification with parents (for me without considerations of gender, according to the current debates in our modern societies), but also the idealization of parents during childhood. Finally, the generosity of this work gives me the feeling, even if I have never met her, to know a little better Natalya!