It is becoming urgent for our society to resolve conflicts with our fooding community and the agricultural world. Conscious of its excessive practices, driven by capitalist excesses, this community has gone through many economic and identity crises. What touches me the most in this book is the infinite sweetness with which Philippe Bazin approaches a world close to his neighborhood, in the geographical meaning, to reveal its qualities. 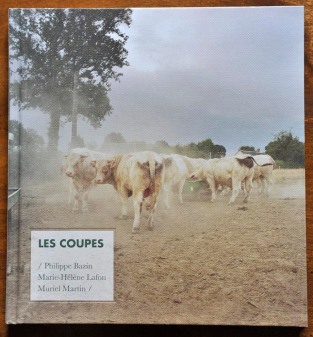 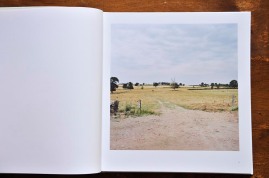 For a dozen years, Philippe has been through being a neighbor then a friend; however, and this is important, he remains a « foreigner » to the family and to the farm domain of Les Coupes. We are in 2015 and, at the request of Muriel Martin, Philippe Bazin will document life at Les Coupes during a summer that, under the gaze of the photographer, seems a never ending one.

What we notice at first glance is the empathy and closeness with which the photographer is involved in this story, fruit of a constantly renewed astonishment and a complicity that is tied up throughout the pages. And by the way, this book is not so much a book of photographs than a narration of a relationship within the farm community. We meet Muriel Martin with the various members of the family that Philippe meets, approaches, and then sometimes, he removes distant, as embarrassed to be in this place, clumsy facing situations that seem to us from another era. All along this long summer, Philippe Bazin looks witness this agricultural world of polyculture and breeding. He pays the same attention to everything, be it a piece of landscape, humans, animals, agricultural tools… Each element is part of the harmony of the exploitation, each of them is interdependent of the others, they are rub shoulders and rub as if to perform a dance or a farandole. With the photographer, one is always closer to the actions, until smelling furs, fresh milk, blood, manure. It comes back to us the memory of the trips we had made, as children, at the farm of an uncle, an aunt or a cousin, each gesture then seemed simple and natural. 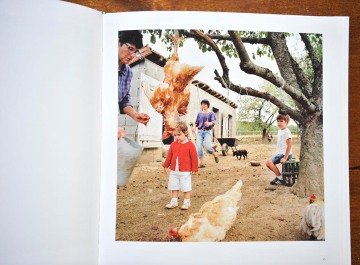 This book also tells us about the tie of the family to the farm, the transmission within the family. Traditionally, it is the boy who takes over the farm, but at Les Coupes, the cards are redistributed, it is a family inheritance that is transmitted intuitively and, from an early age, children testify to this ancestral relationship to animals and everyday tasks. This is this tie, that Philippe Bazin discovers during this long summer which is also explained by Muriel Martin who speaks to us, with her words, in the last part of the book. It was not originally planned, when Muriel asked Philippe to come and have his « foreigner » look on Les Coupes, it was rather a form of hindsight, a distance of the everyday to better look at ourself, from distance, more like watching a video to correct our flaws. But when autumn came and Philippe organized a projection of the photos of the previous summer, emotion overwhelmed her, she had to put her emotions on paper and tell the story, weaving a dialogue with the photographer. The text is generous, as are the photos. We discover a narrative talent that takes us through the persistence of the images encountered in the book, Muriel reveals the images, the hidden meaning we had noticed, but above all, it extends the history of Les Coupes, it enriches. Faced with the eyes of the « foreigner », it brings us the point of view from within, the everyday experience, with its strengths, its weaknesses, its joys and its pains.

Finally, I should precise that to fully appreciate this book, it is important to make yourself available to it and to spend time with it. At first reading, I found it a little bit to obvious with some basic framing, even not close enough (you know, in the meaning of Capa), but it is a book to which we must return, again and again, as a long summer spent in the countryside : at the beginning you get bored and then when you get to know Hermès, Hollywood, Jaurès or Agathe (the animals who are the subjects of these photographs), you take a liking to them and you look forward to the next summer and the moment when you will be there again. It is the same for this book which, once closed, gives us the furious desire to spend a summer at Les Coupes ! 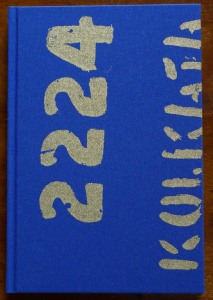 Rarely a photography book has been such a discovery. Kolkata, previously named Calcutta is a place deeply charged with imagination. I never set foot in India, and even, strangely enough, I have never been tempted by that country, perhaps still too much associated in my mind to a whole generation of hippies in search of spirituality.

On the other hand, my senses kick into gear instantly with the mere mention of India. The films of Satyajit Ray first, with his trilogy of Calcutta. The beautiful documentary film by Louis Malle then, realized in 1969. The sound of India, first brought to the West by Ravi Shankar then, reinterpreted by the second generation of immigrants in England as Nitin Sawhney. Odors, finally, that blend subtly spices that perfume the dishes including the spicy Vindaloo. 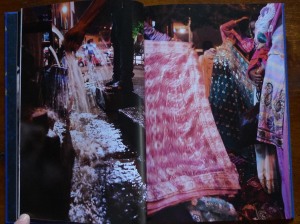 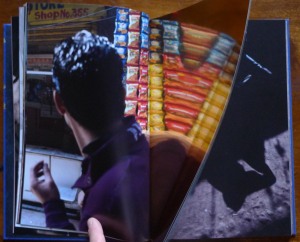 Kolkata by Pierre manages to summon all these imaginary within the pages of his book. Photographs full page matched facing one another. Saturated colors, abstract forms that become an object magnified by the grace of light. And then, water, meat, flowers, textiles, hands, feet and, recurring in the work, blood. Sometimes, we think we can take a break but the gilding of a page returns us to the image seen before. The only real break is actually a cry of rage: a quote from Pier Paolo Pasolini discovering this town and already hard-pressed by the beast lurking in him! 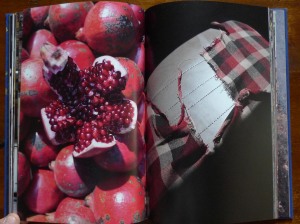 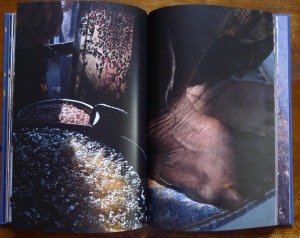 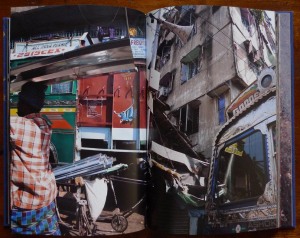 The frames are tight, images are closed, details succeed the details, and we lose ourselves in a sense of déjà vu, a kind of “I’ve already been there,” but no, it is only the city that continues, that constrains us in itself, that saturates us with feelings. We never really “see” the city, which is, here, presented in a fragmentary way, no spatial recognition, no large views, but a perpetual strong and effective evocation. The noise swells, smells invade us, the sounds become deafening, the city explodes in front of our eyes … We try to breathe, to take a break. The book even manages to make us feel the exhaustion of a walking day through the streets. The work of Pierre reaches a huge level of immersion that confines to a form of empathy. We are not only spectators crossing scenes but we become actors. We make our way, we stop on a detail, our mind wanders, looking for eyes which we fail to cross, a look that coyly escapes ours, all in an endogenous chaos that seems to be rebuilt every day from its own traces.

And finally, we have this question that remains: what does the number 2224 mean. We will perhaps need to go there to find the answer and experience full-scale sensations already perceived all along the pages. It is not so common that a photography work can get as much in tune with the different senses that hearing, touch and smell. 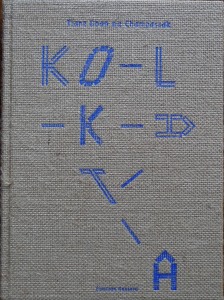 Finally, it would be unfair not to mention that other great book published last year about the same city of Kolkata by photographer Tiane Doan Na Champassak and published by Editions Bessard. We find the same energy, but the evocation is not the same. The comparison is interesting, it reveals the singularity of the photographic gaze. The city is not experienced in the same manner, it is therefore not represented in the same manner. It includes the sounds of chaos, but Tiane’s Kolkata is traversed by ghosts. Inaccurate pictures of characters that appear, and we do not know if they are real or merely a memory. The photographs make us switch to the violence in the city which is no longer soothed, but becomes the negative of the previous work. We came across drugs, poverty, prostitution, a trance seizes us. We are behind the scenes, with the people that moves the night. The light has changed, and so are the gestures ; the city is shared : the uses are not the same, and we came across the remains of the day … 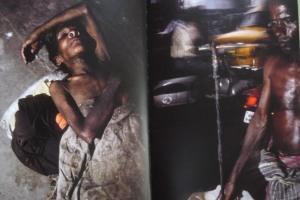 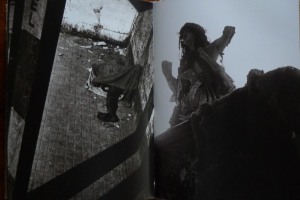 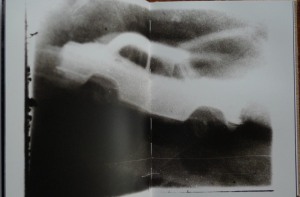 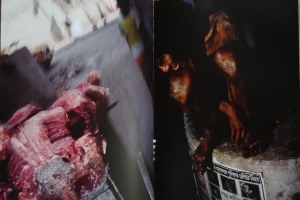 More info on those books: