Thibaut Cuisset : landscape photography as a praise to slowness.

When it comes to landscape photography, we have in mind American photographers : Stephen Shore, Joel Sternfeld, Robert Adams, Lewis Baltz… Well many who were part of the New Topographics, or inspired in a direct filiation.

There is also a French tradition for this genre, which started in XIXth century with the Mission Héliographique which commissioned five photographers to witness the state of the country (especially in purpose of reconstruction of remarquable buildings that have been destroyed after the French Revolution and the following trouble periods), and, of course, the famous DATAR commission in the 80’s.

Amongst others, I really appreciate the work of Thibaut Cuisset. I could summarize his work by those words : the praise of slowness. He is the exact opposite of an action photographer, even if he shares a word with the war photographers : campaign. And, in fact, it is the best description to explain the way he works on a subject : a slow and long relationship.

Thibaut Cuisset is a French photographer, born in 1958, and now represented by the gallery « Les Filles du Calvaire » in Paris and Bruxelles, whose artistic director, Christine Ollier, recently published a book about landscape through contemporay photography. This gallery is specialized in landscape photography. 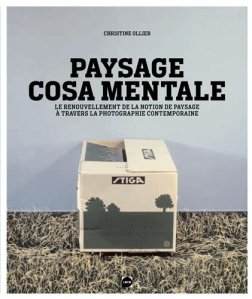 Thibaut Cuisset mainly work on commissioned projects or artists residences. He started in 1992, with a residence at the Villa Medicis in Roma. Year after year, commissions after commissions, he slowly improves his specific style : a color photography slightly overexposed in order to delicately desaturate the colors. This treatment emphasizes the distance to the landscape which seems to come from another time. We never see human beings on his photographs except as a tiny spot, which remains almost invisible. He takes the time he needs to understand a place, and the perfect compositions of his images are the result of this long awaiting for the « decisive moment ». If you wait long enough, the essence of the place will outcrop. All anecdotic details will disappear in the benefit of a wider comprehensible organisation of the frame. We can consider those photographs to be modern transpositions of the paintings of Caspar David Friedrich, staring at a contemporary landscape. Maybe in our busy, hyperactive society, this is the new quest for romantism, to put some distance with the others, to look at a new emptied landscape, some aftermaths of the civilization in a loop with the untouched wild natural landscapes. 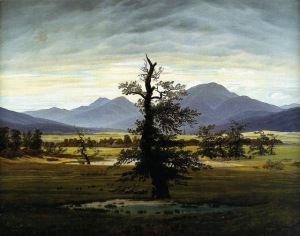 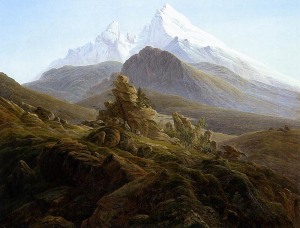 This approach culminates in his book « Le dehors absolu » (published in 2005 by Filigranes Editions), in which he alternates photos from two different areas : the namibian desert and Iceland. This book is strangely disturbing as it introduces some confusion when reading the photos. In associating two oppositions, the warm desert and the frozen Iceland, Thibaut plays with the contrasts which disapear behind a formal aesthetics. The shapes are the same and the only key to understand the places is the color of the country, some cold blue or green textures opposite to warm yellow or white landscapes. Both photographs become abstract paintings, we don’t understand the scale, we have no references except a few bushes or stones ? This is reinforced by the fact that these are not known areas. None of them shows similarities with are usual surroundings, with places we use to walk through. 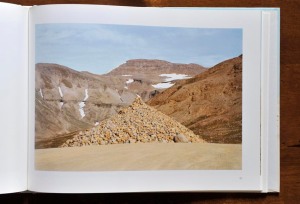 Two other books refer to more inhabited areas : « Campagne japonaise » et « Nulle part ailleurs, La bouilladisse ». In « Campagne japonaise » (published in 2002 by Filigranes Editions), we discover Japan as we don’t know it. More used to Moriyama, Araki and many others, we discover a world of sober colors without inhabitants. It is like if Thibaut has been waiting for the places to be deserted. The slowness of his photography draws us back to XIX century, when the exposure time was long enough to erase all living presence on the photograph. Here again, the careful selection of the moment draws our attention to the formal organisation of places, by a line or a touch of color.

With the book « Nulle part ailleurs, La Bouilladisse », (published in 2011, by Images en Manœuvre Editions) we are in the heart of Thibaut Cuisset’s paradox. How to photograph a village, without its inhabitants ? Does it make sense ? Is it the best way to capture the specific essence of a place (nulle part ailleurs means nowhere else) ? This is very disturbing again, we wonder if we are in a ghost town. Streets, roads or paths are empty, no human being in those spaces, some houses with the shutters closed (some secondary houses unoccupied), an out of service old train station, closed because of the disappearance of local trains. The only two signs of life, in the full book, are cars parked, but aren’t they abandonned after a disaster, and some smoke coming up from a field. Here again, the absence of people drives us to an abstraction, we are not disturbed by anecdotes, and we feel that the photographer was patient enough to empty the frames with disturbing details. What remains is the everlasting organisation of a French village. By removing the population, we focus on the specificities of this village. Everything here exist in La Bouilladisse… and nowhere else ! 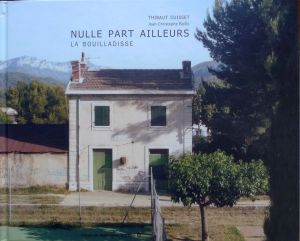 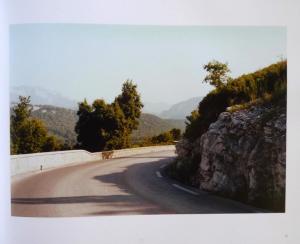 Working with the same approach, his photographs of Moscow, made in summer 2007 are also very impressive (published in Les Cahiers de l’Ecole de Blois N° 8 – 2010). We don’t know if we see places not yet fulfilled by their inhabitants, or if they have already gone… Overweening projects seeking people in a time of worldwide crisis.

For his books, Thibaut Cuisset always works with a writer. Jean-Christophe Bailly has done a lot of texts to accompany his publications, but he also worked with Philippe Lacoue-Labarthe or Jean Echenoz for his recent « Le pays clair » in 2013, published by Actes Sud.