The sociology of football : An unconditional love, by Alex Ingram and FC Volga United by Sergey Novikov

In the mid seventies, as a teenager, one of my biggest concern was football, particularly because, in France, it was the glorious time of « Les verts » the football team of Saint Etienne which gained access, in 1976, to the final of what was then the equivalent of the European champions league. I with my friends had a crazy spring time watching all matches until the last one versus the Bayern who defeated St Etienne 1-0. In those days, every spare moment was dedicated to play with a ball or… to collect Panini stickers and save them in a, seasons after seasons, never finished album. I discovered recently that, nowadays you can buy the missing vignettes from their internet site, clever business ! 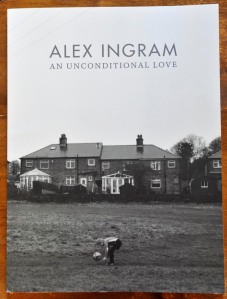 « Un unconditional love » could have been, at least in the first part, my own story and that’s probably why I like it so much. What Alex Ingram shows us here is the true and honest passion an amateur could have for football in its more noble consideration. 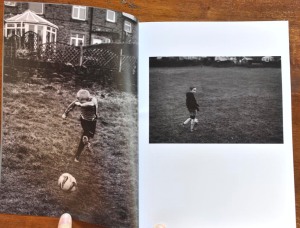 The book is organised around what could be the story of someone. It opens with black and white photos of kids playing in fields, backyard houses. We instantly recognize the English greyness which remind the film Kes by Ken Loach : here the bird is replaced by a ball, but the young boy has real similarities with Billy Casper. So when the « film » begins with the first pictures we’re caught by the story. 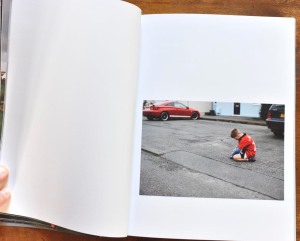 Then we move a little further, times are changing and photos are now in color. We follow the teenager, having his first official team shirt, playing his debut matches in front of a couple of spectators, in some almost deserted stadia with not nets for the goals and a burger van for restaurant. All those sequences interlaced so we never really know if we follow one single person or if we have different characters who interact. 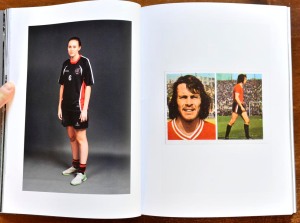 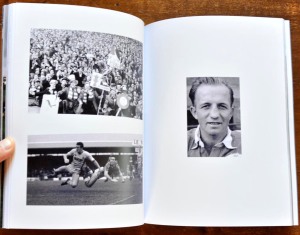 The middle part of the book is dedicated to the memories. Of course here are the Panini vignettes which alternate with contemporary photographs shot in studio by Alex Ingram. The confrontation turns to a funny mixture. The old photos are incredibly dated 70’s while the studio photos are modern young women standing in sport suits, showcasing the evolution of this sport which was mainly, or even only, a male game in the 70’s. There is a great attention to the use of color and black and white which emphasizes the passing of time. Amongst the collections of photographs we found some old black and white pictures « from the archives », photos from the 70’s are grainy and faded while the recent ones are bright and colorful. It is in the middle of this section that comes an essay by Senior Lecturer in Sociology David Green who explains his equivocal love for Liverpool team but more generally for football. 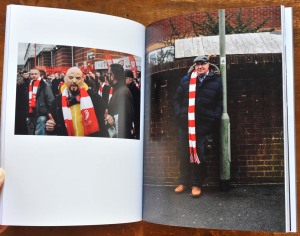 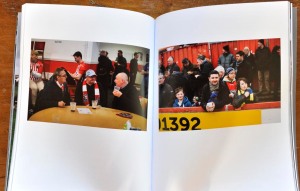 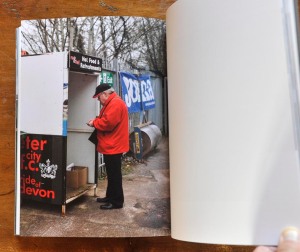 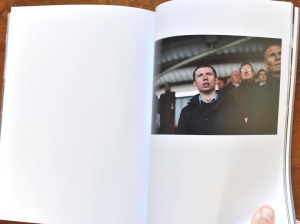 To stay on the tracks of the amateurism, the third part is about supporters. We follow them down the streets, wearing scarves, drinking beers, shouting loud or staring sad, depending on the occasion. We meet people alone but also crowds, people chating or watching religiously, respectful or kidding… This is a portrait of the humankind in its glory and decadence. This is what makes all human being lovable with his strengths and weaknesses. We meet babies, young fellows and elderly people, all generations share the same passion for football. Well… This is England !

What is not the less remarkable with this body of work is that nowadays many photographers work on autobiography which is not the case here. Alex has never been a football fan and his work has much to be considered in a documentary style. He was intrigued by the sociological aspects of football in England and focused around his hometown Bristol. In this work, there is a direct filiation with some famous English documentary photographers Daniel Meadows, Chris Killip, Paul Graham (early years) or more recently Ken Grant or Jim Mortram, amongst many others.

This book remind me another very good one published a few years ago. It is called « FC Volga United », by Sergey Novikov. Despite the fact that they are very different, they share a lot. The topic of Sergey’s book is the football clubs all along the Volga river which all got an FC Volga name. 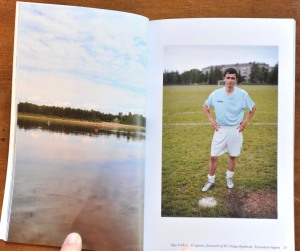 The book comprises three kind of photographs : portraits of players standing on the field and staring proudly to the camera, photos of the Volga river in the nearby area and pictures of the stadia with their surrounding environment and where a competition takes place. Between photos we found texts about the ambiance before, during and after the matches which explain the context with sentences heard around the stadium. 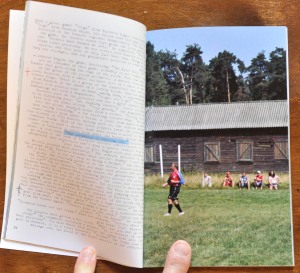 In this book again, what is magnified is the amateurism and the passion for a game. And maybe for us in the Western world, there are some more resonnances due to the magical evocation of the Volga River amongst which is the Red Army Chorus singing the Volga Boatmen or some cinematographic reminiscences from Alexander Nevsky in Nizhny Novgorod.