What can photography be used for ? Paul’s response is particularly successful. This medium was able to restore some meaning to his existence and, above all, enabled him to communicate. Never photography has much deserved its name as “medium”. Difficult childhood, with a few problems, Paul wandered into the wrong direction. Admittedly, both in childhood and in adolescence, the temptations are many. Fortunately for him, from the depth of his depression, the turning point came: he had to resume his life; an old film camera will be the perfect tool. This is how Paul tells his story in the introduction of the book. We have not yet discovered the photographs, it will come in a few pages … 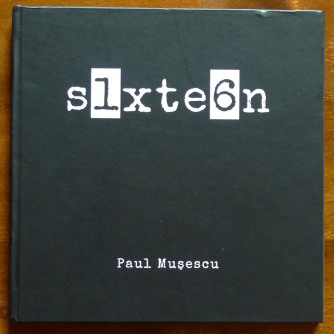 Through photography, Paul finds his way. He finally manages to move on, but more specifically, to communicate without the use of violence. His gaze is poetic and the world around him is changing, it is no more hostile; but his photos remain black, dense, loaded with emotions. We feel some anger that emerges, but it is not turned anymore against its author, it is magnified. Thus we follow Paul in his daily life. He claims us his life, he demonstrates these sixteen years of existence. These photos are a compilation or, rather a emotional view of the author : one could speak of state of mind. 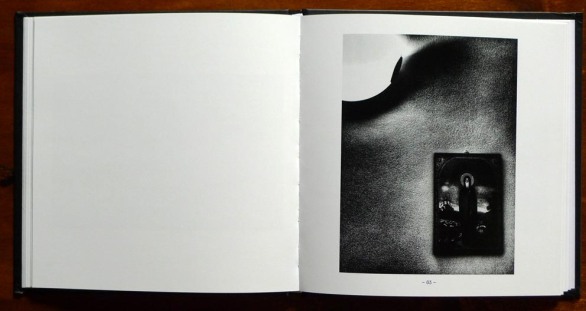 The book is a long sad poetry as chanted on an uncertain (even unprecise due to the beautiful youth) rhythm. If we see scenes of joy, dark shadows lurk yet, ready to snap up the young man to his past. These shadows become real, sometimes, and take the appearance of aggressive dogs, dark figures or blurred faces. Paul takes us with him to find his way, the tempo is slow, a photo every two pages, always on the right, facing a blank page, like to be conscious every time of what is happening; to let the image be printed on our retina. One hesitates to move forward, we slowly follow the mood of Paul, crossing his fears and doubts, but also his hopes. Throughout the book the horizons are blocked, we look more to the ground than in the air. The space is too small for his own development. Yet the book ends with birds flying above a roof. The cathartic exercise has paid off and allowed him to finally to take off as all teenagers have to do; the path to adulthood ! 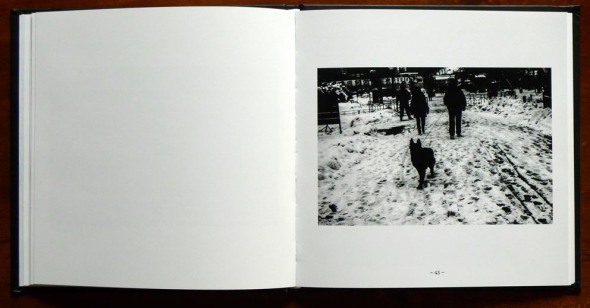 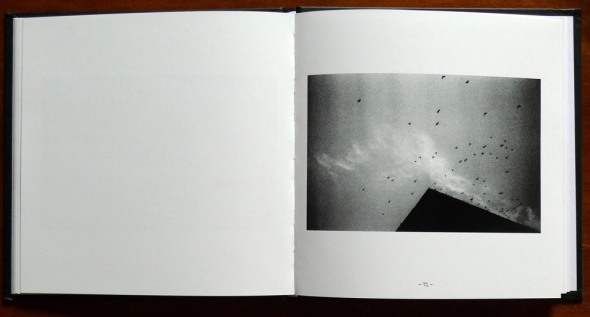 Arrived at the end of the book, one discovers torn pages. It is then for us to imagine the gap. A hidden history, erased, abandoned. It remains hidden sides in Paul story, things he does not reveal to us, but isn’t it the case for all of us? This is what makes us human and makes us feel some empathy for each other. Well, this is what makes the story of Paul so moving. We close the book on sticks for counting the days of the end of a virtual confinement: the pain is over, Paul can now move forward.

In conclusion, this book is from a simple facture, but is really effective. The pictures are very beautiful and it exudes a certain emotion. With some generosity, Paul shares with us his feelings, he tells us his moods. Whether we love or not, it is devilishly daring, at sixteen to show oneself so honestly, and for that also, this book is great! I would love to see those photographs printed large in a gallery. I should also mention Cristian Bassa, a Romanian photographer who has been the supporter of this work and who did the edit / design of the book, and wrote the afterword.

We know, since the last century, that for Belgians, a pipe is not always a pipe ; so why a photobook that is not about Belgium might not be one after all ! Things are not always what they are supposed to be ! 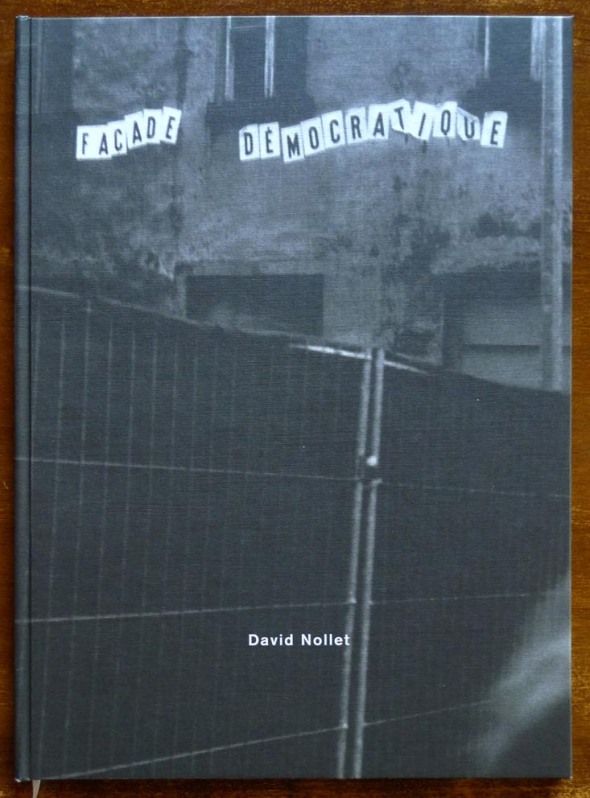 So this book is not a photobook about Belgium, once said, then we can move on. Maybe this book is a book about Belgians, but beyond that, it’s mostly a tribute to the joy of living through what might be called a resilient form of happiness. From the cover, things are affirmed: a squat in the dark, shouting in front of the European borough, a status : « façade démocratique » (democratic facade). People shall overcome technocracy, capitalism and « for profit » enacted rules. And the book takes us on a ride, from bars to bars, the Jupiler appearing in watermarks. Jupiler, the famous beer from Liege, is ubiquitous and its mere mention is enough to evoke the warm atmosphere of bars that remain privileged places of meetings. We walk the streets, we come across couples of all ages, we even see a sign that says, to the face of those who still doubt, that love exists! No tourism in these images but shared moments, moments of encounter, feelings, with the highlight of the famous carnival of Binche, popular festival that occurs in the public space of the town and mobilizes the whole population. 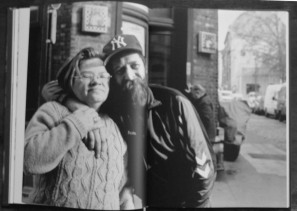 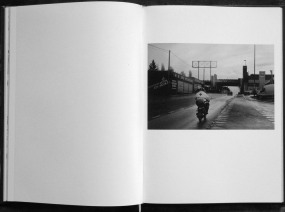 The photographs were made before the 2008 crisis, they are its cure. We meet Pier Paolo Pasolini who reminds anyone who will listen that « Isn’t it for Happiness that Revolutions are made ? ». Of course they are ! This is this kind of revolution that David talks about in his book, the need to fight against the consumerism that isolates people more than it gathers. Not the Revolution, but these daily actions, these touches of humanity that we all carry in us and whose it is our duty to reveal to others. The photographs are superb, imbued with humanism and the printing perfectly gives justice to the quality of black and white photographs (tri-X still remains brilliant). And on a more personal way, it tells about the whole Belgium I like (yes, but beware, this is not a photobook about Belgium). It talks of Ostend which I do not know but dream of visiting, we drink Jupiler, it smell chips and sausages with the more than fifty varieties of sauces that any chip shop must offer ; we hear the screams of children following the carnival, and then we pass in front of Peter Van Petegem’s Danscafé Mustang, hero of the Ronde and Paris Roubaix. It throws myself back in time, full of hope young cyclist, on the roads of the Circuit Franco Belge … That was years ago, well long before the crisis!

We also cross the absurd, a naturalized fish, a triple medalist, who knows what for, a frightened cat under the photographers’ spots, an aboveground abandonned boat ! And all along, this carnival atmosphere that comes sprinkle the book. 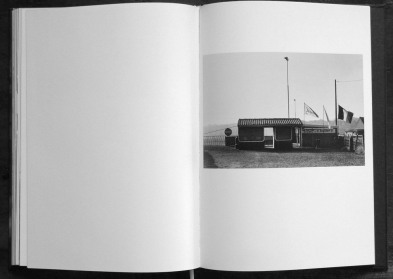 And then there’s this girl, isolated in a car show, dreamy. She reminds me so much of this photograph by Robert Frank, a young woman in an elevator. I just want to join Jack Kerouac who asked about that girl : « That little ole lonely elevator girl looking up sighing in an elevator full of blurred demons, what’s her name & address?  » This image condenses all the tenderness and melancholy of David Nollet, his empathy that crosses pages and takes us with a hope constantly renewed. It is not for nothing than his publishing house is called « Cape of Good Hope » (we shall never give up !). 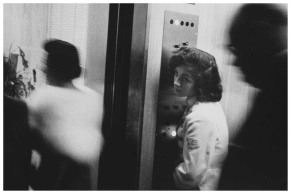 The book ends with a view of a circuit car ride. The kind of same as we were longing for, every year with impatience, when it came to settle on the village square. For a week or two, it was carnival, rides, children’s games, excitation, flirting teenagers, and at the end, hope and expectations, already, that this time shall return the following year. The quality of this work is that David has created a universal story, we can all appropriate it, because we have all experienced those kind of moments. In that meaning, it is not a photobook about Belgium! QED!