Of life and death, Requiem by Goran Bertok

The book « Requiem » of Slovenian photographer Goran Bertok is, in my opinion, one of the books published this year, the most difficult to tackle. It deals with the taboo of death.

I was raised in a Catholic education where death is an intangible process that confines to the repose of the soul. We do not talk about death and I still remember a former landlady, practicing Catholic, who always wondered why the bell tolls if death is a better access to the spiritual world. But when we are confronted with death, especially the loss of a loved one, we finally realized that life has an end. The idea of death is related to life. The notion of death exists only as the « after life » while remaining abstract since no one ever came back to talk about.

What Goran Bertok shows here is what we, in an occidental society, refuse to see. We die, either, but at least let’s not force us to look death in the face! As he explains in the interview inserted in the leaflet printed apart : « There’s difference to think and talk about something or to see and experience something. You see in a crematorium what is spared to most of us ». 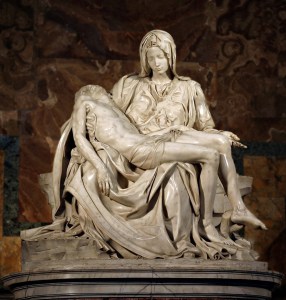 It is always disturbing to face the death, we still have a sense of shame and the only way to overcome this is via aesthetics. This is what we recognize with Michelangelo’ pieta (above), Bach’s passion (Matthäus-Passion BWV 244 at the end of the article), or in cinema, as in « The Seventh Seal » by Ingmar Bergman when death comes to invite protagonists in a final macabre farandole (above). 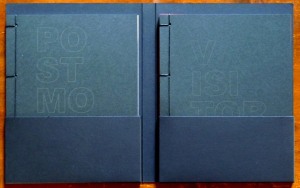 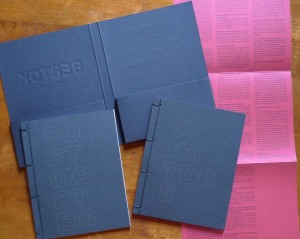 The book « Requiem » is divided into two parts, each one is a book in itself. The set is a cardboard sleeve where the two books are inserted, plus a leaflet which contains an interview of Goran Bertok and the colophon. All components are matte black and the titles are embossed on the covers. The leaflet is printed on a red thick paper. 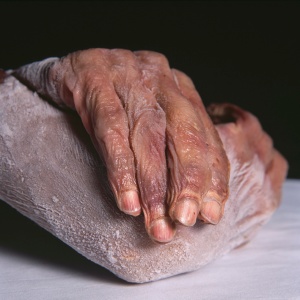 The title of the first part is « postmortem », and if the cover is black too, images are printed with white margins. Postmortem shows the bodies of the dead preserved before cremation. White suggests that we are still among the living. These pictures are seen as the idea of us, living, we have about death. We are surrounded by light (white pages) thus by life and we look at these moments frozen for eternity. Photographer attempts to show the loss of life by the rigidity of the sensory organs (ears, nose, mouth, eye, hand). Even without the ice marks, one understands immediately that these bodies no longer work and, what can better tell the death if not total lack of perception? Life has gone… 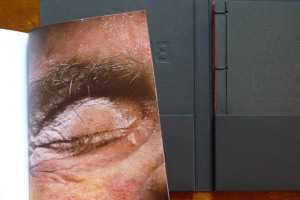 The second book is itself a journey beyond the death, we discover death at work. It is called « visitors » and includes a photographic sequence made in the crematorium. This is a series of photographs that shows us flames composing abstract paintings in which sometimes appears a skull which will decompose more and more. These images are quite unbearable because it shows death at work, but mostly because it shows what we refuse to see : the passage between the dead body and the urn. The ceremony at the crematorium, ends with the move of the body that disappears in a light corridor. Then, it’s all over, and we will return a few days later to retrieve the ashes. The cremation remains an abstraction to which we do not want to give too much attention. This part of the work of Goran Bertok, in addition to showing the « unshowable » also questions the ethics of photography. How far can we go and can we show everything. He himself, in his interview, won’t tell how he got access to the crematorium for this series and asumes that it is ethically questionable. The answer is probably in each of us, and up to each of us ! 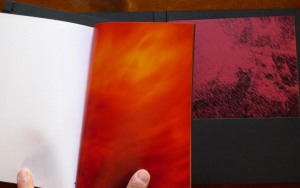 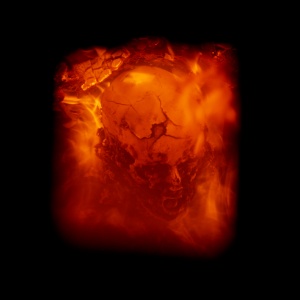 The book, as an object is really beautifully crafted, thereby helping to assimilate the harsh images. It finally becomes a sacred object, a kind of ex-voto, a tribute to the death, which in fact is a tribute to the life without which death does not exist !

A suggested soundtrack for the article :

To order the book : http://www.theangrybat.com/#requiem

All photos copyright Goran Bertok and the Publisher.

It is a warm day today in France, so why don’t we go for a walk by the river…

Documenting the communities living by the River Thames from the source to the sea, through their connections to the river and its surrounding landscapes. This is more or less the purpose of Tom Farmer’s work which was funded via a crowdfunding campaign on Indiegogo. The photographs have been made during the last years and a touring exhibition has started in 2014. Then the idea of a book came out and took ten more months to become real. And here it is, in a ultra limited first edition of 20, which will be probably followed by a second edition very soon !

I like the idea of documenting a community, but the nature of the community did not make the work easy to apprehend. Here we are not in a closed world in the casual sense of « community » with a limit which is defined by the territory, but, like in many communities, the appartenance or the belief is up to everyone. The River Thames has its own existence, a source in Gloucestershire, and 346 kilometers later a mouth in Essex. The name Thames is supposed to mean « dark » whose the title of the book refers to ! When you live by a river, you can choose to live with or without it. You can « grow up » in the floodplain, enjoying all activities induces, or you can just dream to « escape ». This is when you are (or not) part of the community.

There are two main reasons why I really like the book. The first one is very personal : I have a particular relationship with The River Thames since I have been on a summer camp, years ago when I was a teenager, in Wallingford in Oxfordshire. We spent time visiting around but also had some free time for canoeing, which was, of course on the River Thames. I am particularly at ease in the water and this was the only time in my life when I got almost drowned. Since then, I consider myself as part of this community of the Dark River and I don’t blame it. Well, you may already know that I like to add some personal considerations to my book reviews. 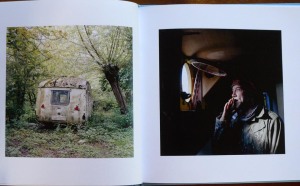 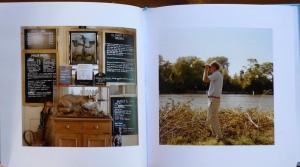 The second one, more simple, is a fascination for English photography, especially when it focuses on the Brits and their way of life. In his work, Tom Farmer shows us all the life beside the river. From open landscapes to detailed close-ups of the banks which confines to some intimacy. We’re not on a guide tour but rather with someone who leads you to his very secret and hidden places. You meet boats and find some fishing spots, you discover an old caravan at the bend of a path. In the first part of the book, we are in rural areas and slowly, industrialisation appears. Trees disappear to let the place to concrete buildings. The landscapes change from natural to anthropized and they open. The horizon becomes visible, when not hidden behind a wall and the light also changes. It brightens. But apart in the first photograph, the presence of human beings is always palpable in the photos, wether it is a person herself or the trace of anthropisation (a pylon behind trees…).

Many scenes shown are popular events : a traditional fest, a point of view from Battersea park, regattas, a takeaway van with people queuing…) and all those photos are interspersed with some intimate close-up portraits of inhabitants. They sometimes stare proudly at the camera or don’t pay attention to it, absorbed in their activities. The third typology of photographs is « interiors » photographs. People are photographed inside their home, or empty rooms are shown with what appear to be decorations or trophies hanged on wall. They say a lot about their owners… Last but not least, I also really appreciate the square format of the photographs which does not push the reader in a preconceived formal reading. 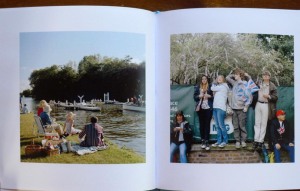 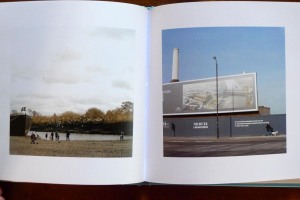 Hardcover book with a blue linen and a silkscreen cover, 22 x 22 cm, 60 pages with 45 color photos. Print run of 20 for the first edition.

And the gallery where to find the book if some copies remain : www.vortigernmargate.com

All images copyright Tom Farmer, can be removed on request.