Where are we now ? by Geert Van Den Eede

Cape of Good Hope was first a photobook blog by David Nollet. It became an independent publishing house when David published his own book entitled « Façade Démocratique » in 2016. Two years later Cape of Good Hope offers us a new book whose poetry is reminiscent of the previous one.

Geert Van Den Eede is a Belgian photographer who brings us, throughout this book, in the Balkans. The photographs were taken from 2007 to 2015 in Romania, Bulgaria, Macedonia, Albania, Kosovo, Bosnia and Herzegovina, Serbia and Montenegro. The title of the book refers, as much, to the state of this fragmented, disputed, broken territory, as to the photography itself and its own question of representation. Where are we now? of these borders, lines and continually changing patterns that have fueled all fantasies and generated so many dramas for centuries. Where are we now? of this ability to represent with the photography medium. In the foreword, Ognjen Lopušina compares these two statements with the Sisyphus ordeal, finally condemned to continually climb a rock at the top of the mountain without ever succeeding, so Where are we now?

Usually, I do not read the foreword of a book before seeing the pictures, I do not want to condition my perception by the considerations of another. Yet this time I did it, without really knowing why, so I already know a little what I’m going to find, especially since this text is a kind of caption of the photo on the cover: a structure of concrete terraces whose we do not know if it is a finished work, a work in progress, or a demolition site; a kind of perpetual movement which, like this country, never stops to reshape itself, to redraw itself, moving back and forward. So, actually, the photographic representation becomes a challenge. How by its immediacy could it show these turbulences, these movements, sometimes so subtle that a foreign eye would not succeed in discerning them.

So we turn the pages and move on to the book. Very quickly, we are touched by these ephemeral moments that get entangled. We walk with the photographer, we stop for a moment, then we resume the journey. We meet a few people, some suspicious, others distant and, everywhere, traces where an uncertain future stands alongside the tortured past. Geert Van Den Eede describes his work as a travelogue, a sort of wandering across the Balkans, with no purpose nor goal than to record everything that crosses his path, to try to understand this territory and its figures … and the form is successful. The layout is sober and a certain poetry emerges from these places that are not at first very attractive. They become touching or even fragile, even if they are embedded in concrete structures. Each image is rich and the frame filled. We stop and the drama begins, the actors are in place, the acts follow each other and are not alike, or maybe they are, since we read harmonics that hold the piece all along, which gives it its coherence. Each of these bits of history would be a pretext for a novel, point of departure or arrival of a story that would be built in the background. 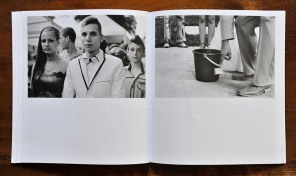 Concrete is very present throughout the book, it give rythm to the sequences and punctuates the spaces, both public and private. It is subject, becomes scenery, sometimes disappears in rural areas to reappear further. It is the leitmotif of this country, a promise of a modernity to come which is already fading by turning to new futures, like this cosmonaut with the colors of America and its neoliberalism devastating trend. There remains, however, a certain grace in these modernist abstractions, but perhaps it is the same kind of grace that can be found in the photographs « underexposed on an expired 3200 ASA film from a forgotten East German stock », to quote Ognjen Lopušina. 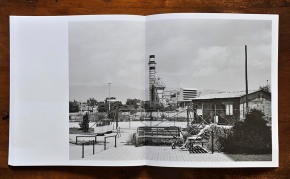 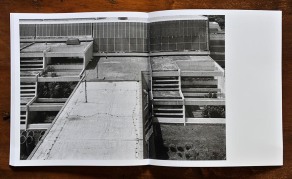 So, I really do not know Where are we now? but with a certain humility, I got to know this country better now, and that’s not bad! Thanks to Geert Van Den Eede and Cape of Good Hope.

The link for my previous review of Façade démocratique : https://whoneedsanotherphotoblog.wordpress.com/2016/05/16/facade-democratique-by-david-nollet/