The unbearable sadness of the disappearance of the working class ! Pascal Anders : Lothringen.

In the XIXth century, during the industrial revolution, many steel factories have settled in the east part of France named Lorraine. This is a beautiful area which had its time of glory up to, what is called in France, « Les trente glorieuses » which means the thirty years period of prosperity, during the reconstruction after the World War II till the first oil crisis in the 70’s (1945 – 1975). This area was famous for being the cradle of the unions, when it was a full employment time, and when people were coming from all over Europe (especially Italy and Poland) to work in the steel factories. The steel was one of the production that French people could be proud of, participating in the construction of boats, trains, cars and trucks but also some fantastic projects like the Eiffel Tower ! Unfortunately, with the growing globalization, the French labor became too expensive in regard of the Asian one (especially from Mittal factories in India).

The decline was pretty fast, the factories started to close one after the other and none of the successive governments succeeded to stop this decline.

« The hope for the Lorraine, it must be the hope for the whole France. The one of a nation which rediscovers herself, which refuses the decline and is determined to reach the top of the industrial countries. » This speech was pronounced by François Mitterand, President of France, a couple of month after he had been elected in 1981. Thirty years later we finally know that those words were said in vain… The last two furnaces, in Florange – Lorraine, were definitely closed in April 2013.

Well, at this point of the reading, you may think : what the hell has this to do with photography and photobooks ? It is time for me to introduce Pascal Anders, a photographer who is living in Lorraine. He already self published some photobooks about the Berlin Wall (Mauerreste), New-York (NYC and Alphabet city)or Paris (Paris est tout petit) and his last publication is focused on the place where he lives : the Lorraine. It is a very small book, 13 x 20 cm, 32 pages and 24 photos, color offset printing in a limited edition of 100.

I received this book recently and I was instantly overwhelmed. This is probably one of the best representation of the loss of, what I could call, the utopia we have been fighting for, in the XXth century. From the industrial revolution to the end of the XXth century the rights of the workers have regularly increased, including 35 hours of work per week, five weeks of holidays and the retirement at the age of 60 (in France). All those rights, hardly won, have blown out recently with the peak of capitalism which has driven us straight in the wall of crisis ! 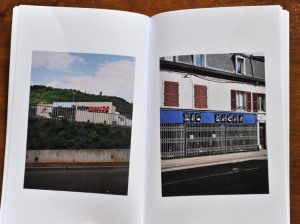 What can we see on the photographs of Pascal ? We discover what seems to be abandonned towns and villages, deserted by their citizens. The curtains of stores are all closed and the only remaining traces of people are posters of workers and unions on walls, or an old sculpture to celebrate the past glory. Despite a few cars, it seems that the photographer is walking in a ghost town. The worst may probably be that it is not devastated which means that people are still living here. It is not a wasteland and we wonder if people stay inside to hide their shame of what this beautiful land has become. 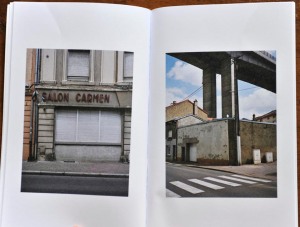 Last but not least, Pascal is distributing his books for free. Via his web site you can send him a request to receive his books.

All images copyright Pascal Anders (can be removed on request)

7 Comments on “The unbearable sadness of the disappearance of the working class ! Pascal Anders : Lothringen.”