← When landscape photography becomes a political statement. Volunteer by Paul Seawright.
Who needs another photobook list. Looking back in the miror ! →

On borrowed time, by Henrik Malmström.

Watching through the window, the rain falling outside, this brings me back in time, a few years ago, thinking about a haunting book. It has been a few months since I wanted to talk about it : On borrowed time, by Henrik Malmström. 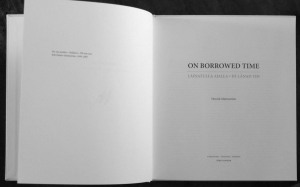 Well, I should say that the book is beautiful, but it won’t give it justice. In 1999, Henrik’s older sister was diagnosed a cancer. She fought for years and what we discover in this book is her final fight, when she went back to hospital for the last few months.

In his foreword, Jörn Donner explains perfectly what is so important with this book. In fact, most of us are not afraid of death, but we are afraid of the painful period that can accompany each of us on the way to the passing away.

What Henrik documents here, is his relationship to his sister, but also with her forthcoming death. That was probably the way he found to stay beside her, and maybe to make what is happening acceptable and bearable. Fully in black and white, we come on board with Henrik for his journey from greyness to the night. 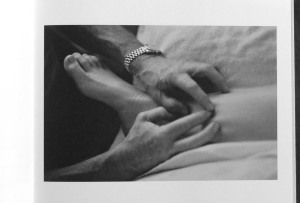 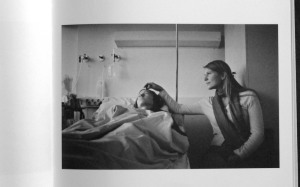 The book alternates pictures of Maija (Henrik’s sister) with outside views of the hospital as metaphors of a lost freedom, and details on which we focus during visits like if we did not want to face the death coming, looking elsewhere to avoid the pain. Some blurry pictures reflect our distress, the spirit can’t stand anymore the sadness and we’re loosing our mind. There is such a kind of photograph on the cover in which we can see an angel flying or maybe the soul living the body !

The two last photographs are absolutely stunning, we discover a train in the night which emphasizes the death coming to take away the body. The modernization of the society has changed the death from the well known “The Seventh Seal” to a train driver.

The second and last one shows Maija’s legs beside the drip system rolls, slightly out of focus, like a reminiscent image of the memory. This is how Maija will remain in everyone’s mind in the family. On the opposite of this picture, Maija’s last words, about her expectations that have been stolen. Is it fair to not even reach thirty ? Who had the right to do that ? Unfortunately for her, but also for all of us the question will remain unanswered. 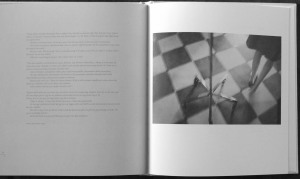 Henrik Malmström is Finnish, but his name is Swedish (there is a wide Swedish community in the West part of Finland) so I can’t avoid thinking to this beautiful song by John Holm : Ett enskilt rum på Sabbatsberg, about a young person sitting beside another one dying to accompany her during her last moments at Sabbastberg’s hospital (Stockholm).

Well, I could talk for hours, but that would not be worth a look at the book ! The book is self published with texts in English, Finnish and Swedish. The trade edition is now out of print, but you can still find copies of the limited edition on Henrik’s site :