← Beware of the dog by Alex Llovet
For your consideration, in my humble opinion – some books from 2018 ! →

Let’s take advantage of the beginning of the year to come back to a very beautiful book published last year, which, if it had not already been mentioned by others, would surely have appeared on my end-of-year list. 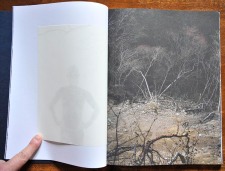 Making a photobook has become a pretty easy thing nowadays. As anyone in this little world, I can only admit that I am submerged every day under new announcements, new requests for crowdfunding campaigns, pre-purchase, and I do not complain, however, it becomes more and more difficult to detect works that stand out and surprise us. Making a book nowadays is no longer simply adding page after page of good quality images, but it’s much more about sharing an experience, told through a series of photographs, sketching a narrative in which the reader will be snapped up and whose he will only come out changed. 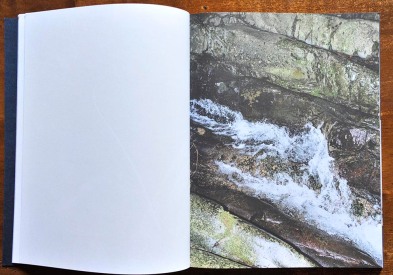 Well, Subterranean river is this kind of book, a one in which I enter with caution, a one which I sees to understand without going straight to the explanations of the author. Whether it’s a photobook, a novel or an essay, I never read the preface before entering the book, I do not want to know what I have to wait for and I prefer to stray on side roads to to fully live my own journey. So obviously, the book of Łukasz surprised me completely as much as it confused me. As a symbol, the first image shows us a nature in disorder, as a way of telling us that what is going to follow is no longer commonplace, so it only remains for us to let be taken in charge. The color images are very strong, we look for a meaning, we detect traces. Other images printed on a very fine paper come punctuate the narration, like telling us another song. 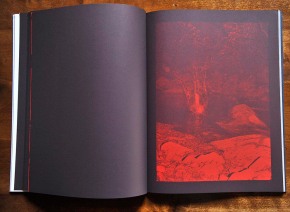 And suddenly, these two songs come into resonance as we discover a new series of photographs printed on red pages, characters, as ghosts appear in baroque compositions. Within this complicated nature, we finally crossed paths and established a communication. The book seems to be a spiritual research in the meaning of what Kandinsky said in his book « On the spiritual in art » about the different relationships between movement, form and color, in the artistic practice.

In a text, at the end of the book, Olga Drenda reveals part of the mystery and explains the quest Łukasz has made across Japan. We are here dealing with a spiritual journey, no anecdotes about the Japanese society, no sort of Orientalism as we have known for centuries. This trip could have taken place in other places, but if Łukasz chose Japan, it is, as he explains, because «  When travelling to Japan, I knew one thing only — I wanted to take pictures based on Japanese mythology; I wanted to photograph the Yokai — the monsters of legend. Photography came as the result of working in new surroundings; it was the end process of meeting people and building relationships — this is surely why so many of the pictures (and the intimate ones in particular) are of my friends or the people who trusted me — of humane people. The non-human world is more than a background or visual filler; it is of equal importance. I understood that what interested me most here was nature. Man is a part of it… ».