← Made me better than before, Pilsen, Chicago, by Akito Tsuda
Right time right place, by Robert Rutöd →

ZATO, what a strange acronym! When looking on internet, we find the explanation : закрытые административно-территориальные образования ЗАТО, zakrytye administrativno-territorial’nye obrazovaniya : ZATO. So, there is only one letter away with that other famous acronym that refers us to this period of the twentieth century that was the Cold War: NATO (just rotate the N a quarter turn). 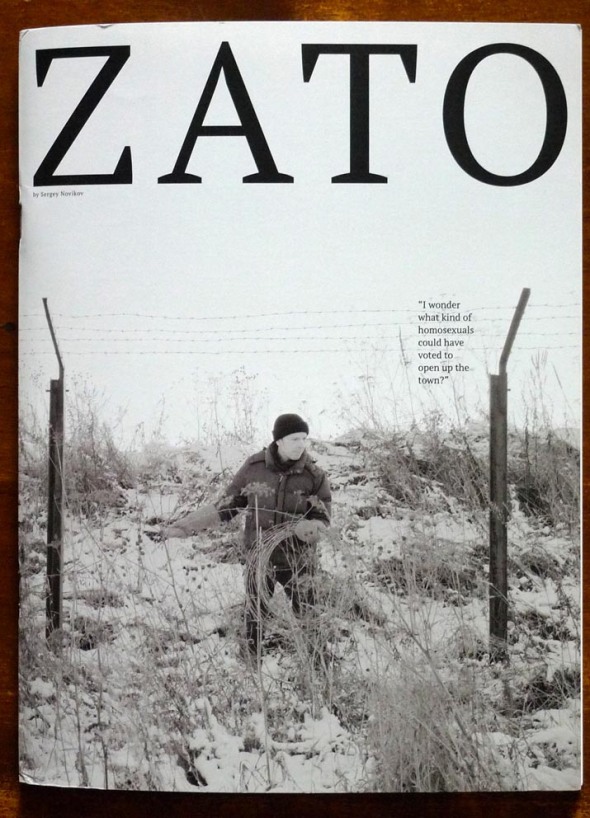 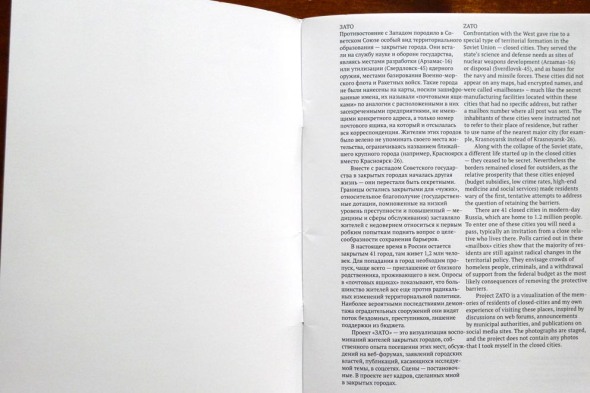 In his work Sergey takes us to his homeland Russia, in the footsteps of the former USSR. ZATO are closed cities. That means closed to anyone from outside. These cities were considered classified places and therefore off the radars, even for Russians. Weapons factories were found there, or nuclear enrichment or strategic factories, and moreover everything that had to remain secret. These cities were protected by a wall and had severely restricted access, inhabitants were not allowed to mention their places of living. Since the opening of the eastern countries, restrictions are not as stringent, but access to these places is still regulated. One need a formal invitation from a resident to get there. Well, you better read the complete story in Sergey’s book… 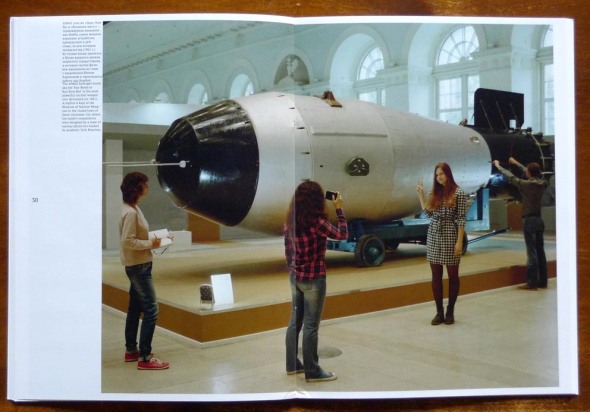 I really like the approach chosen by Sergey Novikov. It is not question here of a documentary in the traditional form (or to better say, an old style form) : Sergey has not gone to one of these cities to make the photos; and the narration going on here, is completely staged. The book consists of two parts. In the first, Sergey strives to represent the closed cities. He staged situations, creating a halfway space between reality and his own imagination developed from memories and stories told. The photographs are symbolic thus have a lot more strength. What are the limits of documentary photography and its so-called objectivity, would it be an illusion? Before him, others such as Jeff Wall have worked the idea of representation. If photography has its limits, so why not get rid of this objectivity to take sides. The bias of the author who says things, not with distance, but with appropriation (cf. on this subject Jeff Wall’s photograph entitled “dead troops talk” about a fight scene during the Afghanistan War). 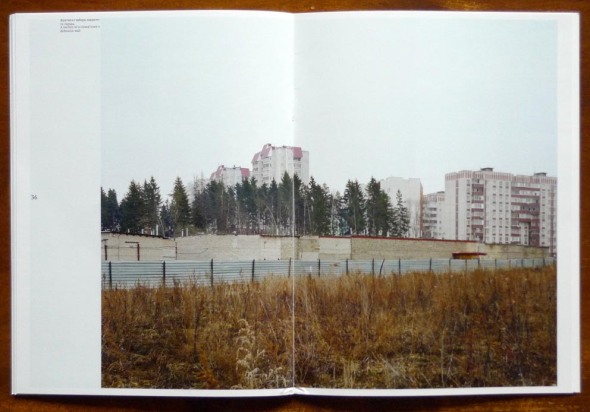 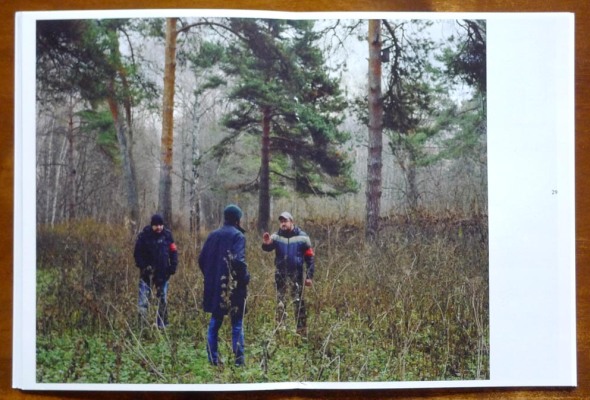 This first part is superb, each photo is a canvas. The characters are frozen, as stopped in a time-space that one seeks to understand. The photos come with a short caption that explains the context and situation. Each situation appears assumed and some characters catch our gaze, seeming say “and then …”. The situation of people living in these cities illustrates the paradox of the whole Russia: a mixed sense of confinment faced with the pride of belonging to something greater, to the point that these inhabitants are fiercely opposed to the opening of these cities. Which, of course, refers to the dilemma between security and freedom: to what extent are we ready to sacrifice our freedom for a small gain in safety. These closed cities are, on average, cleaner and safer than other Russian cities, so why let coming hordes of potentially dangerous individuals that could destabilize this precarious balance. 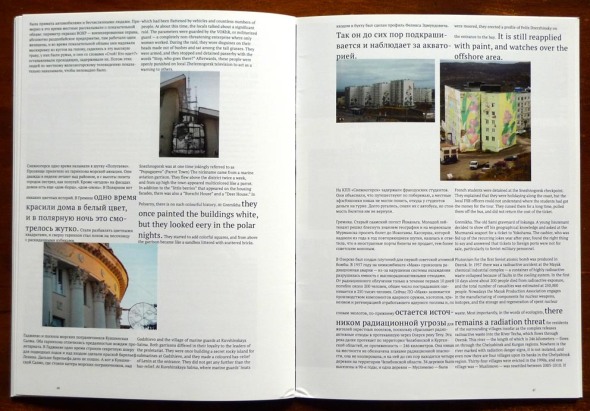 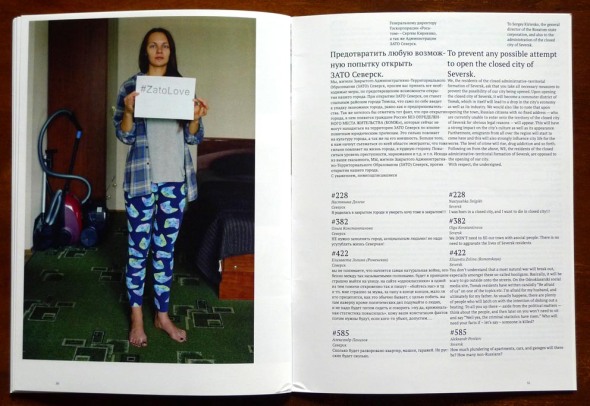 This is what is mentioned in the second part of the book. The layout completely changes, the sobriety of the beginning gives way to unbridled collages. Sergey offers us the testimonies of experiences related to these cities. People who wanted to go there or inhabitants, shown through real elements such as pictures commissioned from photographers living inside, as to prove that these cities exist. These images act as counterpoints to the first part. They do not have the same visual qualities but they reflect reality. They reveal nothing more than the appearance of these places, similar in every way to other Russian cities. And we understand, here, that despite this reality effect, images from the beginning have told us a lot more. The book ends on excerpts from social medias. Introduced by a photograph that shows the hashtag #ZatoLove, Sergey lists all the evidence that people are strongly opposed, even violently, at the opening of their cities. 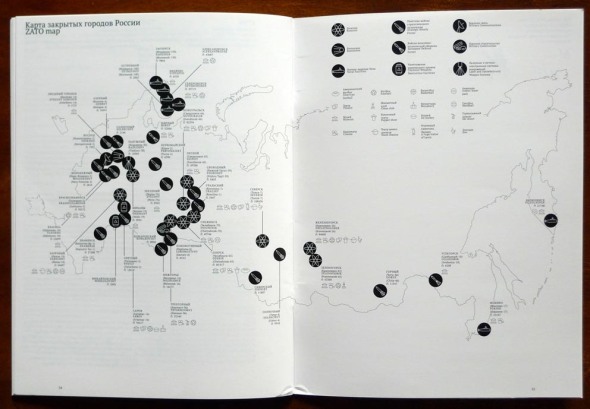 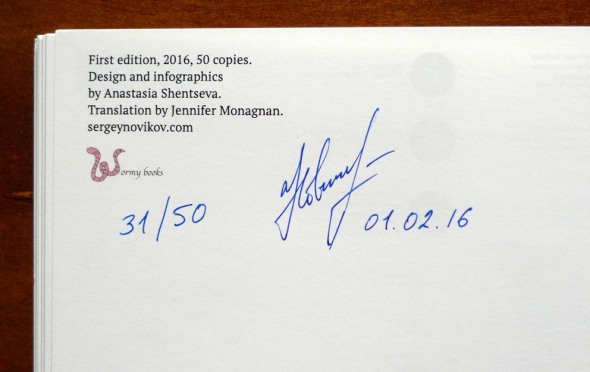 ZATO was self published in 2016 in a first edition of 50 copies which are already sold out. A second print run of 25 copies will be available soon. Softcover, digital print, 21 x 28 cm, 56 pages. Texts in Russian and English.